What a meaningful and memorable birthday I had today! I seldom observe my birthday and try not to pay it much thought or attention… but this one was notable.

One of our 5th-grade service learning activities is to sponsor a Veterans 5-K race in conjunction with honoring a veteran. We held a True American Hero Tribute for Mr. Colin Delahunty who came to our classroom to share some of his experiences about World War II and his subsequent life.

Sergeant Colin Delahunty served in the 87th Infantry, 7th Army, as a heavy weapons specialist. He served under the command of General George S. Patton and fought in the Battle of the Bulge. Colin also helped liberate captured U.S. soldiers from forced labor and concentration camps in central Germany. He shared some great stories with the students and never once glamorized war. In fact, he said time and again how senseless war is with all the killing, suffering and misery it causes.

A more insightful story about SGT Colin can be read in the Deseret News entitled “A soldier’s story.”  I just want to share one of his experiences he related to us because it moved me to shed a tear or two. He talked about his first night in the Ardennes in Belgium and related the following story:

We got out of the trucks and we were in a forest of fir trees, tall beautiful fir trees. I’d never seen anything prettier in all my life. Heavy snow. Colder than hell. Wet feet. Cold as heck. We started digging foxholes and we’d shove off the next morning.

I got one (foxhole) finished. About the time I got in it, some little guy, a replacement, passed my foxhole. He was crying, lost , didn’t know where he was… So I pulled him into the foxhole with me and kind of comforted him. I told him he couldn’t do any good wandering around in the dark. He was going to get challenged and he didn’t have the password or anything else, so I kept him in the foxhole with me all night.

We sang Christmas carols. I gave him a pep talk and kept him busy talking. We shoved off at 4 o’clock the next morning into combat. I don’t know what happened to him, but I always felt sorry for him.”

He then told some stories about the forced labor and concentration camps where he helped liberate POWs. He became somewhat emotional shedding a few tears. A little bit of anger surfaced as he conveyed his thoughts about what had taken place there. Colin then answered questions from students for the remainder of his time with us.

My father-in-law, Ralph Higginson, also fought under General Patton. I’m sure he fought in many of the same battles that SGT Colin fought in. I have great respect and take great pride in these soldiers from America’s “Greatest Generation” who fought in World War II. They will always have a tender place in my heart for all of their incomprehensible sacrifices.

Having served in the military, I reflect on D-Day from time to time. I try to imagine the feelings of those first five or six waves of soldiers, who were to land on the beaches in northern France, being told the night before that they wouldn’t be going home. I think of that ultimate sacrifice and all of the beautiful things they missed out on in this awe-inspiring life… it ofttimes humbles me to tears.

First and foremost, I want to thank Colin for coming to our school and sharing part of his life with us. I know it is not easy for him to get around presently. I also want to thank our school counselor, Holly Willard, for introducing us to Colin… she does so much for our school; above and beyond what is required.

I also want to thank my 5th-grade counterpart, Lora Hudson, for taking time away from her literacy class on such short notice.

In addition, I want to thank my boss, Mrs. Swan, for the three banana creme pies, she made for my math class and me. They were the best I’ve ever tasted… unless my mom is reading this, then hers are the best!

This evening Jill and I celebrated both of our birthdays–Jill’s birthday is on the 13th–with a quiet evening out and dinner at Carvers.

All-in-all it was a satisfying and memorable birthday… one that I will always remember with much fondness, appreciation, and gratitude for those who made it so special!

Quotes – Romboy, D. (2014, September 20). A World War II veteran’s story: ‘I had witnessed man at his best and at his worst’. Deseret News. Retrieved from http://www.deseretnews.com/article/865611405/A-World-War-II-veterans-story-I-had-witnessed-man-at-his-best-and-at-his-worst.html.

How to Succeed with People
Where the Red Fern Grows
Summary 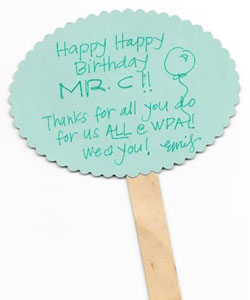