You are here: Home / Career Related / From NCTM to Jack’s Birthday Party

From NCTM to Jack’s Birthday Party… what a busy week. I spent four days in Las Vegas, with my lovely wife, Jill. I attended a regional National Council of Teachers of Mathematics (NCTM) conference. On the way home, we stopped at the farm for our grandson Jack’s birthday party.

We left this past Wednesday for Las Vegas and got there about 2:30. We subsequently checked-in at the Rio All-Suites Hotel and Casino. Mrs. Shepard, the principal of my school and my boss, actually took really good care of us. The resort was fantastic and the rooms were more than comfortable.

While I was attending various sessions of the math conference Jill, of course, was shopping… and lounging around the pools. In the evenings we hit the best buffets in town and “pigged-out”. Thursday night we attended the Shania Twain concert in the Colosseum at Caesars Palace.

I had an enjoyable time in Las Vegas and learned a great deal about the new Common Core standards relative to teachings mathematics at the elementary school level. We left Vegas Saturday morning in a hurry to get to Jack’s birthday party that afternoon.

Jack’s Birthday at the Farm

For some reason, Steven and Jessica wanted to have Jack’s birthday party at the farm. I had no idea of what to expect when we got there. However, the event was very well planned and organized!

Steven hooked up the hay wagon to the tractor and shuttled guests in from the road to the party site. The party site was located at the northeast end of the farm by the beehives Steven had put out there… go figure? The food was good and the party lasted for about two hours. Everyone, especially the grandkids, had a great time and a lot of fun.

I have embedded a slideshow below to include a few pics of Caesars Palace in Las Vegas and Jack’s birthday party at the farm. 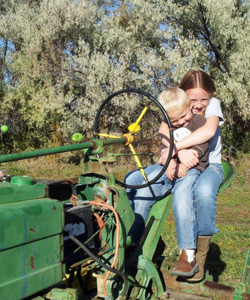