I read this story–from time to time–about my great, great, great-grandmother, Lydia Knight, anytime I feel life is throwing me a few too many curve balls. She is one of my heroes and one of the most inspiring women I know about. I cannot personally imagine going through the hardships that she and the other Saints who left Nauvoo, IL, to come across the plains, had to endure.

It is my hope this biography will inspire my posterity, as well as all who read it, to never give up and to always persevere. Also included is a copy of Grandma Knight’s Patriarchal Blessing; at the end of the biography by the hands of Joseph Smith, Sr.

When Newel Knight met her, she was twenty-three; a lovely young woman who was boarding with Hyrum Smith and helping Hyrum’s wife with the housework. Newel had just come from presiding over the Colesville Branch, whose members had been driven out of their homes in Jackson County. His wife had died in the persecutions. But this lovely young woman seemed to be the answer to his sorrow and loneliness.

“Lydia,” he said one day when they were alone together, “You seem very lonely as well as me, why not comfort each other?”  To his surprise, Lydia rose to her feet in indignation and said, “Sir, I know my condition is lonely and not a desirable one, but I do not wish you to insult me. I have not the slightest knowledge where my husband is, not whether he is alone, alive, or dead. But I do not wish to take any step to make my condition worse or bring shame upon my family and deprive me of the salvation I am seeking to obtain.”

With that, she left the room with a puzzled Newel Knight looking after her. What husband? He had intended no insult–only marriage.  Then he learned her story.

Lydia Goldthwaite had been born in New England to a happy family. But in school, she met a popular, dapper young man named Bailey. They fell in love, and she left school to marry him. However, Bailey turned out to be a drunkard, and after their first child was two years old–and with a second on the way–he abandoned his wife and children. Lydia returned to her parent’s home, but sorrow followed sorrow, and both her children were dead within the year. Lydia’s spirit was broken.

Later Lydia gathered with the Saints to Kirtland, Ohio. When she arrived, all she had was $50 she had managed to save. Hearing that the Prophet Joseph Smith was a prisoner, she unhesitatingly donated all her money toward his release.

And so Lydia came to Hyrum Smith’s home, where she met Newel Knight and refused to marry him because somewhere in the world her legal husband, Bailey, might still be alive. Newel tried to persuade her that according to the law, after three years of desertion her marriage was considered void; but it was not until the Prophet sanctioned her remarriage that she consented, and then she entered into the marriage happily.

Joseph Smith performed the ceremony himself on 23 November 1835 in Hyrum’s home. Though the principle of celestial marriage had not yet been revealed, he did bless them and spoke with them, sharing ideas on marriage that were entirely new to many of the saints.

For the first few months of their marriage, Newel worked on the Kirtland Temple. After the dedication–and after Lydia and Newel had received their endowments–they returned to Missouri, where Newel had lost his first wife.

Persecution followed the Saints from Jackson to Clay County. Many nights Lydia, like many other Latter-day Saint wives, sat home with her children while her husband stood guard duty against the mob. But the danger did not stay outside with Newel and the other men.

Once, two brethren who were being chased by the mob came to Lydia’s home. Though she knew their presence there might cost her, her life, or the lives of her two children, she let them in. When the mob came, she stood at the door and deftly handled their questions, turning them away and saving the brethren.

Through this time of trouble, she remained calm–perhaps because enough grief had already touched her life and she knew how to fit joy into the corners. When a sister complained about their trials, she said, “Be calm; let your heart rather be filled with the humblest prayer that God will turn aside their wicked purposes.” She managed not to hate the mob, and her faith was undiminished…

Lydia and Newel Move to Nauvoo

Driven out of Far West, Missouri, they moved to the swamplands around Nauvoo where Lydia came down with malaria. Desperately ill, she asked Newel to go to the Prophet and ask him for a handkerchief blessed in her behalf. Newel agreed and returned shortly with a handkerchief. She took it eagerly, but her illness only grew worse.

Finally, it seemed she was about to die, and she called to Newel and whispered to him that she felt the end was near. Instead of staying by her bedside, however, he got up quickly and left.

He returned a short time later–with another handkerchief–“Here Lydia, he said, here is a handkerchief from the Prophet. Oh, my wife, the one I brought before was not from him, I so hated to trouble him with so many Saints demanding his time. But this is from Joseph, and he says Heavenly Father shall heal you.”

The next morning her non-Mormon physician was shocked to see her nearly well.

Later, the Prophet helped her heal her malaria-afflicted son. Though many Saints counseled her to give up and let the child pass away, she was determined. “I cannot let him go,” she said, “because I feel it is not the Lords will that I should part with him.”

She called in the Prophet, and after hearing what she had to say he said, “Take some warm water and soap; wash your child from the crown of his head to the soles of his feet.” Then Brother Harris was to anoint the child with consecrated oil.

Lydia followed the Prophet’s instructions. At first, the child seemed to improve; then he took a turn for the worse. Lydia might have given up then–after all, the Prophet had only said, “I think your child will live.” But, she didn’t give up. Instead, she repeated the entire process, and the boy was completely restored to health.

The Lord’s blessings during these hard times were a great help to Lydia when, during the trek west, her greatest trial came. Well out into Indian country her beloved husband Newel Knight became ill. He finally said, “Lydia, it is necessary for me to go. Joseph wants me. Don’t grieve too much, for you will be protected.”

At first, Lydia prayed for him to be spared, but as his pain grew worse, she prayed for the Lord to release him from his pain. He died. But to sustain her she had the promise of the Prophet: “Sister Lydia, great are your blessings. The Lord loves you, and will overrule all your sorrows and afflictions.”

Alone in Indian country, with seven children and pregnant with the eighth. Lydia perhaps felt that these sorrows were too great for the Lord to “Overrule”; but as she cried out for her husband, he stood by her side with a tender smile and said, “Be calm, let not sorrow overcome you. It was necessary for me to go. You cannot understand. Be patient, I will protect you. You and the children shall never perish for the lack of food.”

So Lydia continued to live and serve as she always had. Her children shivered through the winter in a hut built in front of a hillside cave. She spent one cold night with rain coming through a finished roof on her and her newborn child. Even after better lodgings had been found, Lydia had to work–raising crops and washing and sewing–to survive and raise money to join the trek west.

She had not forgotten her obedience to the Lord, either. After her husband had died she still had a yoke of oxen and a wagon. Because she and her infant could not make the trip at that time, she consecrated the wagon and animals for another family to use. When Lydia did leave, she and her children walked most of the way, finally joining the Saints in Salt Lake Valley in October 1850.

Lydia Endures to the End

Even after she joined the Saints in Utah, Lydia’s trials were not over; after a few unhappy years of a third marriage, she was back to teaching school to support her children.

Later she accepted a proposal from a widower named McClellan and married for the fourth time. Twenty years of a good relationship followed, and then she was left a widow again at the age of sixty-eight. She served as a temple worker in the St. George Temple almost until her death in April 1884. There in the temple, where eternity seems only a footstep away, she looked forward to returning to live with her beloved Newel, the man to whom she had been given for eternity.

Four times in her life Lydia Knight was left alone with children to support, but she proved herself worthy of the Lord’s trust. She never lost the great courage she showed during the Missouri persecutions when Newel was called from her side to guard the brethren. “My dear, be careful of our little ones tonight,” he said, “I must go out and join my brethren who are on guard. You will not be afraid, will you?” Lydia answered, “Newel, God rules…”

Bonus Material: Several Summaries and Publications on “The History of Lydia and Newel Knight” in one PDF 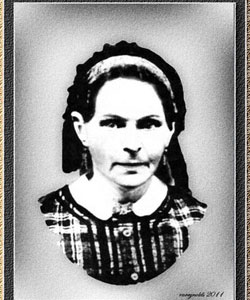