Personal history of Lois Coon as written Ruth Palmer, typed by Mark D. Carlson from Grandma Palmer’s Book of Remembrance. I have made no changes to the text except to correct spelling and grammar errors, and separate long paragraphs to make it more readable for viewing in electronic format. Year written by Grandma Palmer: unknown. Various historical inaccuracies exist in Grandma Palmer’s recollection in relation to FamilySearch which I have not and will not correct here.

The Story of My Great Grandmother’s Life
by Ruth Palmer

Lois Coon was born in Canada. When she grew up she was a small pretty girl with big black sparkling eyes that won over Arnold Stevens. They married while she was quite young and soon joined the “Mormon” church.

They did not get married in the temple as there were none at that time to get married in. But awhile after they were married they started for Utah to join the rest of the saints.

Her husband went with the Mormon Battalion leaving her at Winter Quarters. While he was gone he was thrown by a mule and killed and was buried in Pueblo, Colorado.

This left her to cross the plains alone with her children. She lost all but two of them and suffered many other hardships during the trip across the plains.

She was a very hard worker and a good manager and with a great deal of faith, she persevered through all–Willing to lose all if need be for the Gospel.

In Utah, she married a man by the name of Woodward. There were not married long before they separated.

Then she married a man by the name Jordon and had one son that lived, Justus.

It was not long until she was a widow again by the death of her husband.

She had a beautiful home, made lovely by the many flowers which she had grown herself. She did all her own work until she was eighty years old when she died.

Just before her death, she decided to have her temple work done.

She wanted to be sealed to her first husband but her only son who survived was by Jordon and he would not consent to be sealed to Stevens. She worried about it a great deal finally deciding to seal Jordon to Justus to her dead sister and sealing herself to Stevens and their children.

The following information was added by Mark D. Carlson: 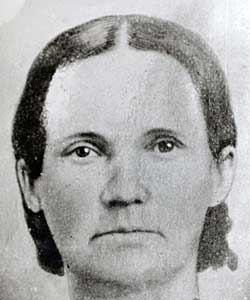