Jon Theodore Carlson was born September 26, 1965, and passed away on December 15, 2015, due to a heart attack at his home. Jon was the son of Duane A. and Virginia Palmer Carlson.

Jon was a dedicated farmer and welder. He married Cris Rowley but later divorced.  He loved the mountains, hunting, fishing and riding his horse. He earned two associate degrees; one as an electrician and one as a welder. Jon also earned a bachelor’s degree in Technology Management with an emphasis in Electrical Automation and Robotics in April of 2003. He was a genius in mathematics. Jon was a devoted member of the LDS Church; as such he was a faithful home teacher and served a two year calling in the Provo Temple.

He is survived by his mother, Virginia, and siblings; Mark (Jill Higginson), Dianna, Helen Robertson, Mitch (Laura Thomas), Heidi (Michael) Hansen and many nieces and nephews. He was proceeded in death by his father, Duane, and nephew, Tyler Lombardi.

Jon will be greatly missed by his family and friends.

“First and foremost, I would like to thank each and every one of you for your support and prayers for my mother and her family over this difficult past week. It means a lot to her–and to us–to know how much my brother has “touched” so many lives.

“To sum up, what Jon meant to me in a few short paragraphs is impossible. I am not even used to him being gone yet. I have been so overwhelmed with emotions this past week. Those feelings of personal loss, reflections and regrets, and empathy for members of my family; especially my mother.

“Anyone who knew Jon knew how much he loved his family, even though he might have shown it in a way that was hard to understand at times. He worked hard at–and wanted more than anything–to make his family proud of him. Every time I visited with him, he would tell me about the many projects he was involved in and how he was trying his best to be a better person. I am so incredibly grateful and blessed to have shared this precious life on earth with him, even though it was in a limited way which is one of my regrets. It seems that in the process of just trying to get through each day we too often forget to make time for those whom we love and should be closest.

“Jon was taken from us at an inopportune time of year; however, I know he was greeted in Heaven by my Dad. In fact, I can just hear Duane say something like “What are YOU doing here?” in that somewhat gruff voice of his. However, on the way home from Jon’s house this past Tuesday evening, my wife made the following statement to me which gave me comfort and rang true to my heart. She said, “I feel Heavenly Father has decided that Jon has done all that he could do in this life, has proved himself worthy and decided that he had suffered enough–due to a hunting accident a number of years ago–and that it was time for him to come home!

“Jon had a huge heart! Although he was quiet, his presence was always known. My brother had so many amazing qualities that we often overlooked! He fancied a very simple lifestyle, and it did not take much to make him happy. He loved to ride his horse and the “Harley’s” but was unable to do so recently because of his health and stamina.

“When we were younger, I remember taking him to school with me while I was attending BYU…. he would sit in the math lab, while I went to my classes, and work with the lab assistants on his calculus while a junior in high school. He was happy when attending school and earned two associate degrees and a bachelor’s degree.

“Jon was my Dad’s shadow. He loved to go out to the drilling rig with my dad, during his summer vacations, to spend time with Duane and to hunt and fish when dad wasn’t working. They were truly soul mates because they knew how to push each other’s buttons and always kept coming back for more. One thing is for sure, my Dad instilled such great values and the importance of family in all of his children, and I believe Jon struggled with this…  he so wanted a family of his own.

“Helen, Mitch, and Heidi, I want to take this opportunity to “thank you” for loving our brother “unconditionally” and for being such a special and supporting part of Jon’s life. From the bottom of my heart, I appreciate all the sacrifices you made during the difficult challenges of his life. When Jon was at his best, he had a 100-watt smile! His smile was so “contagious”, and his “laughter” was so endearing.

“I also want to thank my mother Virginia for being a kind, loving, and forgiving mother. As a family, we are deeply indebted for all of the sacrifices she has made over the years. There truly is no mother who is more diligent and vigilant in attending to her duties as the mother of her children. We all love you, mom, and may you be blessed with peace and comfort for the losses you have endured these past few years.

“Life” is a gift from God. I was blessed to have Jon as my “baby brother” for 50 years…. I learned a lot from Jon and life will never be the same without him! I wish I had spent more time with him and talked to him more often.

“Jon, may you go in peace and be with our Heavenly Father, Savior, Dad, other family members, and our many and great pioneer ancestors. You will FOREVER be in my heart and will always be my baby brother. I loved you, still love you, and will always love you!” 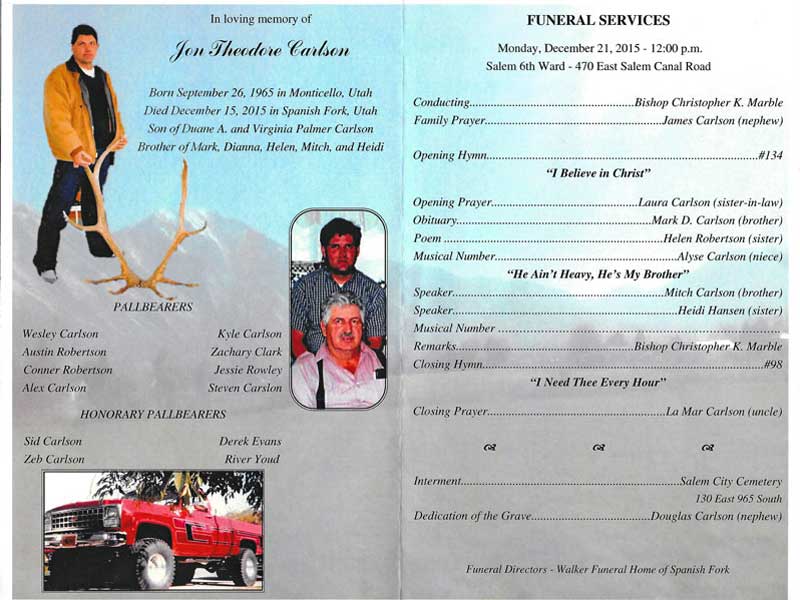 Selected Photos of Jon and Family: 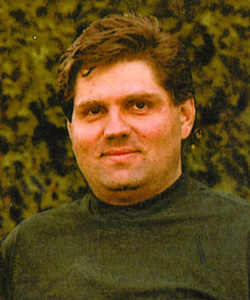